Posted under Personal on August 1st, 2011 by Vivek Bhat
Today, it will be my five years in the Information Technology. So, I think this is the right time to put my thoughts on the state of IT in India – mainly from the perspective of a “Software Developer”

A few days ago I came across this website where the author was wondering why the life of “Software Developer” is just about five years in India, when software developers in West are coding for 20 or 30 years and are still happily developers.

So, what is there in India that we have developers yearning to go into the management since the day they join the corporate world. Hmmm…Well, Let us first go into the kind of work that software developers in India are doing on day to day basis, what kind of work is going on in world class Indian IT companies. The IT in India, is mainly a back office job as of today. Barring a few companies(very minuscule) and projects (much more minuscule) what we in India do is more or less of a support.. Some call it maintenance also :P. Yes, support and maintenance (mainly). Not that much of developing systems(SDLC, from beginning to end- No way!!). We are just the back office guys of the real IT in the west, or better – back office developers. Some guy in UK or USA asks us to put some “.” somewhere in the code, we oblige him by just doing that, no more no less. Every code change we want to do has to be okayed by someone sitting at “on site”.

And the IT guys sitting and coding in Europe and USA just know that. I have come across many instances where the people there just refuse to handover some chunk of work as they do not consider “offshore” as competent enough. Sending work to India, does mean compromising on quality. Do not believe me? Just check this popular web hosting site HostMonster, one of the points they boast about is 100% support based in USA. But, I will not blame the Europeans or Americans for nurturing this perspective of Indian software engineers. It is we Indians, who have nurtured this perspective and that too with so much of dexterity. In a job which just needs nice working logical brains in your head, we Indians have managed to create a class hierarchy. From “junior developers” to “Delivery Managers” and beyond. Why are we so obsessed with creating slaves and masters.. I wonder why! Right now, I am working in Agile software methodology… Which specifically asks that every member in the team should be an expert, does not matter if s/he has 1 year experience or 20 years experience. I remember when I was in my induction and our trainer was telling us explaining this, one of the experienced colleagues pointed out that Agile does not take hierarchy into consideration and is bound to fail in India! He wanted “respect” from his “junior” colleagues and just could not live with the fact after working so many years in IT, he will be just another “expert” in the team.

And, the higher you go into the hierarchy, the less you are supposed to code and the more time should be spent in adding eye candy and bing to your Microsoft excels. That’s when you stop being a developer.

Unfortunately, the kind of management in India also does not inspire good “software developers”. What managers want is “Deliveries”, plain and simple, that he can show to his bosses and in-turn boast about his revenue generating capabilities. Least is he interested in technical or domain expertise of “his” developers who actually are making “deliveries”, as long as they are delivering something on day to day basis(Or at least weekly basis). A developer in turn becomes totally ninsensitive to the quality, as his reputation(in turn ratings which in turn convert to appraisals and/or bonuses) depend more on quantity rather than quality. Delivering more is important than “wasting” your time in increasing your domain and/or technical knowledge. A developer stops digging further, s/he stops learning as the only thing that seems to take him/her further “up” is how well he able to add bing to the excel documents.

In short-term, everyone is doing good to himself or herself. But we are doing a great dis-service to the brand India. Better stop acting like slaves and start living like humans who can “think”.

How to install Oracle on openSuSE 11.3

Posted under Technical on September 25th, 2010 by Vivek Bhat
Note: I am writing this for people who just want to install Oracle for personal use, for learning Oracle. This tutorial is not for installing Oracle for production systems or any critical use. The instructions are for 32 bit systems, it should be same for 64 bit systems but I am not sure. I am installing on openSuSe 11.3, but these steps can also work for 11.1 and 11.2, but again I am not sure 🙂


I will write down the instructions as a series of steps.


Now, whenever you want to start your oracle, First fire up konsole and start Oracle service 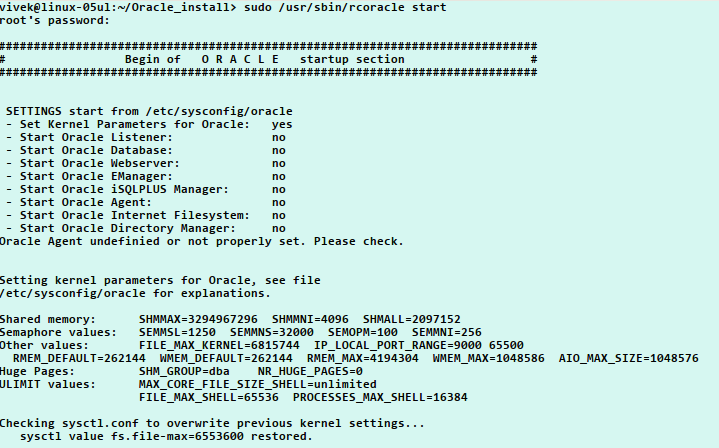 Then become oracle user (You do not need to login from GUI as you did in Step 6, but doing it from konsole will do). Start Oracle Listner. Now login to idle session of oracle and connect as sys and start the database. Connect as sys user. And start the Oracle database. Check the snapshots below: 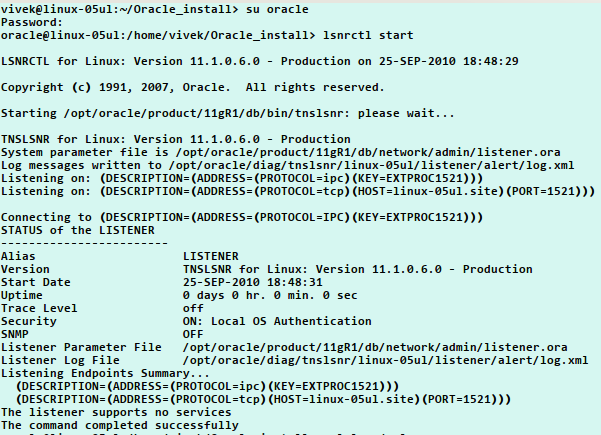 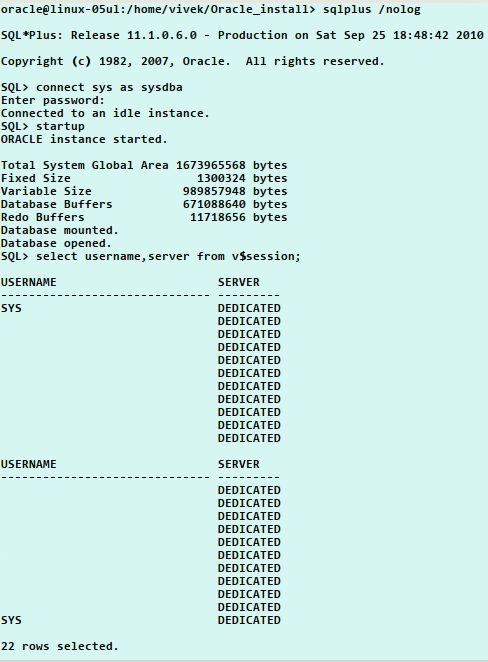 Let me know if this post has helped you or if I have missed something.

Posted under Technical on September 19th, 2010 by Vivek Bhat
After experimenting with kernel and KDE version since the release of openSuSE 11.3, I decided to have a stable system till the next SuSE release, that is till openSuSE 11.4 is released. That means no KDE 4.5 as I do not want to change anything released in SuSE 11.3. Here are a few snapshots which I took after getting everything up and running… I am sure you are going to love it 🙂

Next I am planning to migrate to ext4 from ntfs completely, but that is going to take time.

Posted under Politics on September 9th, 2010 by Vivek Bhat
Did I hear it right! Assertive Prime Minister? Assertive Dr. Manmohan Singh? Ok.. let us first know what “assertiveness” means. As per the The Free Dictionary being “Assertive” means “Inclined to bold or confident assertion;aggressively self-assured”. So what was our dear Prime Minister “assertive” about. He was “assertive” about the thing that he can not “Shut up” his cabinet. So he is “confident” that he can not handle people who he claims to head.
On the Chinese front he says that “we” need to engage Pakistan because he has failed to counter China on Indian terms (Makes me feel once again that why are we Indians so docile, all the time.. everytime!). So our Prime Minister is “confident” that he can neither handle China nor Pakistan on Indian terms. Crux of the matter… our Prime minister is confident that he is capable of doing nothing. He has failed on Kashmir and he has failed on naxalism. In Delhi the Congress(Indira) Government says that the Naxalism is the biggest threat to national security while the cabinet minister Mamta Banerjee addresses people with PCPA (People’s Committee against Police Atrocities) “managing” the rally and the congress (Indira) “Prince” Rahul Gandhi addressing a rally in Orissa with Maoist supporters standing beside him.
I think Indians should stop getting themselves fooled by the “secular” talk of Congress(Indira), the party, whose leader, after assassination of Indira Gandhi justified the killings of Sikhs and in whose rule 5 Lakh Hindus were forced out of Kashmir. What can you expect from a party whose “assertive” Prime Minister Dr. Manmohan Singh calls in and pleaded to Yasin Malik( a former terrorist and cadre of Jammu & Kashmir Liberation front) to break his fast during the Amarnath Land dispute.

Posted under Kashmir on August 21st, 2010 by Vivek Bhat
The NEWS channels are abuzz with the letters asking Sikhs in Kashmir to either join “aazidi” movement and embrace Islam or leave Kashmir. No one in India can resonate with the chilling fear these Sikhs would have felt but for Kashmiri Hindus who went through this trauma in 1989-90. I was around eight years old when the shrill voice of loudspeakers of every mosque in Kashmir asked Kashmiri Hindus to embrace Islam or leave valley. I had already left Kashmir when a letter had arrived at my maternal home announcing that every young member in the family would be butchered if they do not leave Kashmir.
Unfortunately for us (Kashmiri Hindus), there was no media to take up the issue of what was happening to Hindus in Kashmir. Doordarshan was busy in propagating “secular” politics of the Congress(Indira) kind. While minorities where being butchered, slaughtered, disgraced and forced to leave Kashmir from every corner, the conscience of India was fast asleep in secular slumber. Unfortunately for us, Kashmiriyat died a tragic death that year.
In the years to come I would hear a lot of hair raising and spine chilling tales of absolute brutishness committed by the majority on the largest minority in Kashmir. Like, when one Kashmiri Hindu youth was shot in the knees and elbows and left to bleed in the middle of road while the “majority” entertained themselves at the death of an unarmed man. The terrorists left the man bleeding and went to drink milk in the nearby dairy shop. The man wailed and criedfor help but no one bothered. He kept bleeding until the “aazidi” seeking Kashmiri youths finished their milk came back and pumped bullets into his body to finish of the work. Needless to say, there were no protests and no agitations. Nothing mattered, because only a “Pandit” had died.
The attempt of a Kashmiri Hindu man to conceal himself in a traditional rice drum failed when these mujaheddin pumped the bullets from their AK-47 right into the rice drum. When his wailing widow asked why were they leaving her alive, the chilling answer was – “So that you can mourn his death for life”.
How much will you understand the fear of a young mother who was ready to jump off the second floor of her home with her two little daughters just to save her family from being disgraced by a mob of mad aazidi seeking hooligans who were about to break into her home…
No one heard Kashmiri Hindus then… no one will ever hear us, because “unfortunately” we do not make a vote bank. Today, Kashmiri Hindus are branded as traitors by Muslims in Kashmir because we did not support the aazidi movement. Indians will do everything and will fight to seek justice for the victims of Gujarat and Kandhamal riots, but no one will ever bother about Kashmiri Hindus, because fighting for the justice of Hindus in India is outright communal. Fighting for Kashmiri Hindus means going against the “secular” Muslims in Kashmir. Those “seculars” whose cry always has been “jeeve jeeve Paskistan, nanga bhookha Hindustan”.
Today (21th August 2010), Times NOW called a popular Kashmiri Hindu activist Aditya Raj Kaul as a panelist debating threats to Kashmiri Sikhs. But from the word go gagged him. WHY? Just because no one wants to shatter the sweet dream of “Secular” Kashmir. A dream that has already died decades ago. If people want to live in dreams, they can… But the real hard fact is – The fight for Kashmir is deeply deeply communal. The communities in Kashmir are divided… Today’s Kashmir is Kashmir where the “majority” is brandishing unashamedly its brute power and the minority is lip locked in fear, while “secular” Indians are sleeping over their conscience.
Leave alone Kashmiriyat, even Insaaniyat has died a dog’s death in Kashmir.
« Previous 1 … 3 4 5 6 7 … 9 Next »